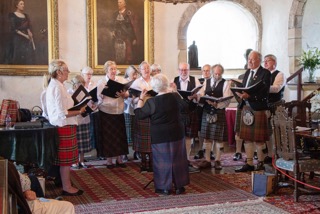 Come and join us for the award-winning Mull and Iona Gaelic Choir, who will be singing traditional Gaelic songs with haunting harmonies in the Courtyard and Banqueting Hall.

The Choir was formed in 1978 in order to represent the Isle of Mull at the National Mòd, which was being held in Oban that year. We won the Selma Shield for Gaelic that year, and since then, we have won it, and various other awards, several times over the years.

All of the Choir’s songs are performed in Gaelic, and are unaccompanied, ranging in style from traditional Gaelic Psalms to modern Gaelic songs. The Choir currently consists of 28 enthusiastic members , ranging in age from 27 to 83, who all live on the Island of Mull.

We are kept very busy over the Summer months performing in a wide variety of venues for equally varied audiences, including castles, piers and pubs!